It's like they were made for each other. In many ways, I do believe they were.

From the moment my husband met my then 13 year old daughter, they just shared an instant connection. I tend to be a little more choleric in my personality and lack some of the laid back (melancholy) that these two share. They're two easy going peas in a pod. Staring off into space at times and totally okay with being care free. I tend to be the one to snap them into focus with my slightly more intense personality. They love it though....I just know they do.

My daughter has been through more than any little girl should have to. From moving around constantly, to dealing with a Mom who travels, she has experienced some difficult transitions.

I didn't know how to be a Mom. I knew that I loved her from the moment I laid eyes on her. I knew that her dimples made me melt every single time she smiled! I also knew that I was raising a very independent child. She was naturally a do-it-yourself little girl....but in so many ways, she had to be.

I was 17 and experiencing some high points in my career, I guess you'd say. I came from an extremely sheltered/wild environment, so teenage things were extremely difficult for me to handle. My tumultuous home life mixed with a lack of knowledge, led me down a very fast paced spiral to awful decisions. I think if I could pin-point it now, it's as easy as being lonely and not having much of a self-esteem. I truly didn't know how to want good for myself or how to let people treat me well. I wasn't used to people being good to me so I ended up thinking I really deserved bad for myself. That mindset manifested itself into how I treated my eating life, how I picked a boyfriend and how I saw who I was.

A few weeks after my 18th birthday and lost my virginity, I found out I was pregnant with Jazz. So scary. My hairdresser gave me the birds and bees talk and I had zero idea how it all really worked. She explained to me that I needed a test and I could be pregnant. Oh boy....that was a mortifying moment. Sure enough as my highlights turned colors, so did that pink line. What a day.

There were so many thoughts that raced through my mind. The first being how can I hide this? What will it do to my career? Will all the people I helped employ be upset with me? I didn't know what I was going to do. I called the Nashville abortion clinic and listened through the prompting on all they required. I considered this option and then felt so strongly that I just needed to quit this singing career stuff and have this baby. By "singing career" I mean "singing ministry"....which meant at the time that I would be DONE with it once people found out. Surely, I was. My records were pulled from shelves and It ended up being quite a lonely time. I was in a horrific situation with a bad guy and I didn't know how to escape it.

The truth is....I was in an extremely scary/abusive situation and so was Jazzy. This guy had been racking up some arrests and doing some pretty repulsive things. With the help of some friends I was able to literally escape this situation one night. It helped that his appendix ruptured leaving him motionless and unable to hide my keys or re-wire the car as he usually did. I grabbed a couple bags, packed up my car, put Jazzy in her car seat and headed to wherever I could go the fastest. I was crying my eyes out knowing I was finally being brave. I even (stupidly) went the following week and tattooed an Asian symbol on my back that I think means "Brave"... So I was SUPER Brave. lol

Jazzy was always all smiles and ease. Throughout the whole ordeal she went wherever I went and never, ever, ever, complained. Not even a bit.

She had her fair share of health issues over the years and dealt with a lot of pain from "Sidney the Kidney".  Sidney was her teeny tiny kidney that gave us a lot of trouble. Eventually they plan on removing him...but we are waiting on that.

Jazzy is a remarkable human. I can't really describe how remarkable she really is. There aren't words for it.

When God was figuring out who would be Jazzy's Daddy, I know he figured that remarkable needed remarkable.

I started to think I wouldn't find that Daddy for her. Over the years she stopped praying for God to bring her a Daddy. It just became us. I don't think she even thought it would happen in her life.  I started receiving Father's Day cards on Father's Day. She started calling me Maddy....(Mommy/Daddy)....We were kind of losing hope.

I'm sure in the times that we visualized who Jazzy's Daddy would be, he might of had on a Navy blue suit with a powdered blue shirt....ha. A guy with dark hair with tapered sides and a little long on the top. Possibly a business man who enjoyed boating....ok.....that sounds boring. Indeed, God knew we needed someone who wasn't boring!!!

There he was...long black hair past his shoulders....possibly a snake skin cuff and eccentric rings... He had on a knit cape/man-cardigan and military boots.....Jazzy's Daddy?

I met this bohemian rocker in my living room and my life changed forever. I was so scared that the thought of my past and me having children would be an issue for this never married man with no children. I was really hoping that he had a big heart. Boy was I surprised to learn that his heart was about the biggest I'd ever seen in a human.

Ryan was immediately in it! From the moment I brought Jazzy into the equation he was so comfortable with her and never awkward. He was her bud from day one. He never gave off vibes that he was uncomfortable.....and I had definitely experienced that before. He was all heart and all in!

Over time we had so many conversations about Jazzy and her life. He expressed to me one day that he would absolutely love to adopt her. He said that spiritually he already feels like her Father but would love to make it official.

I'm so excited to say that this Friday: May the 15th, at 9:00 am; Jazzy will officially become Jaslyn Taylee Edgar! I'm overflowing with happiness in my heart for her. Ryan is already the most amazing Dad and friend. I can't wait to see their relationship unfold over the years and I feel overwhelmed by God's goodness. Restoration in any situation is so very possible. No matter how difficult it looks.

God truly can take absolutely anything and make it beautiful. 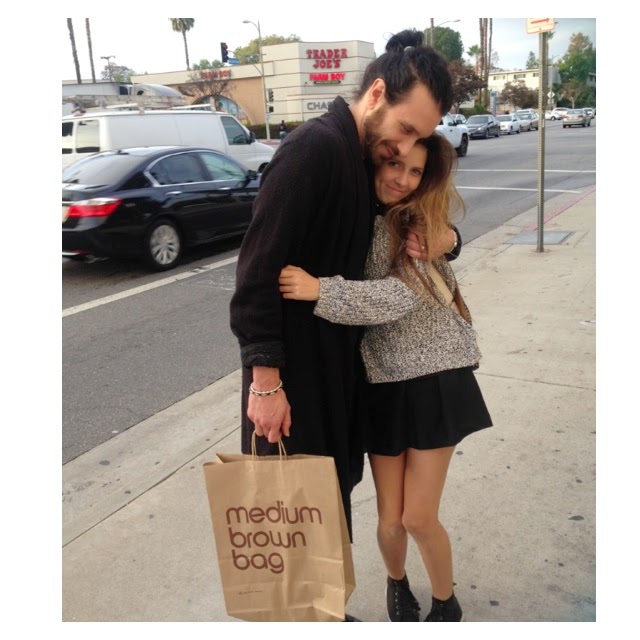